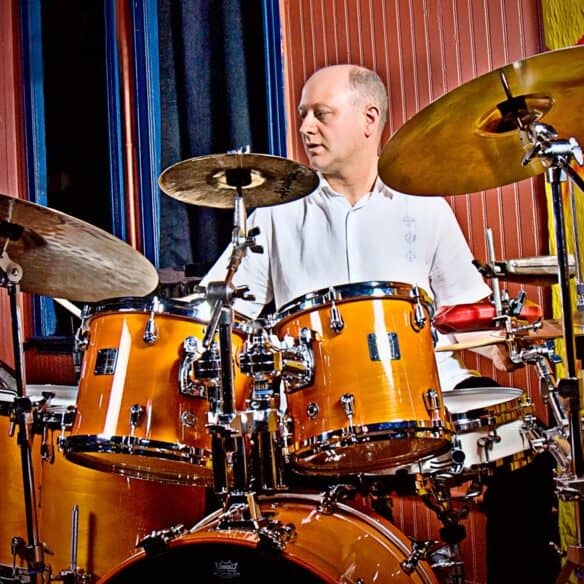 Drummer/Percussionist Bertram Lehmann is a sought-after player within a multitude of musical contexts in the New England region and beyond, primarily performing jazz, Latin, and world music. A Berklee faculty member since 2004, he is active in the Percussion, Ear Training, and Liberal Arts departments of the college. Equally in demand as a drummer as well as a percussionist, he continues to draw on his extensive instrumental experience and background as both a performer and a scholar of a wide array of musical genres and styles. Rooted in solid initial orchestral percussion training and his first professional exposures, he quickly expanded into jazz and other contemporary genres, and since then has become one of the top experts on Caribbean and South American drum set practice, as well as other traditions from the African diaspora and also Africa, India, and the Mediterranean.

Career Highlights
• Appearances and/or recordings with artists including Paquito D’Rivera, Randy Brecker, Dave Liebman, Anat Cohen, and Antonio Sanchez, among others, and international tours in Russia, India, Bermuda, South Korea, and the British Virgin Islands, among others
• Over 60 recordings, including recent releases with the Klaus Spencker Trio on Crossing Borders, Felipe Salles’ Interconnections Ensemble on The Lullaby Project and The New Immigrant Experience, IMAGINE 5’s self-titled debut, and Ian Ethan’s Earth Suite, among others
• Performances worldwide include shows at Lincoln Center and the Metropolitan Museum of Art in New York City; Symphony Hall and the Boston Globe Jazz Festival in Boston; the Chicago World Music Festival; the Kennedy Center in Washington, D.C.; and the Hannover Jazz Week in Germany
• Worked with the quintet of Brazilian vocalist Luciana Souza; the Afro-Latin supergroup Mango Blue; the idiosyncratic Indo-Jazz ensemble Natraj; vocalists like Rebecca Parris and Mili Bermejo; Unu Mondo featuring Randy Armstrong & Volker Nahrmann; and vibist Victor Mendoza, among many others
• Presented clinics/workshops at the University of Bremen (Germany), Fundacio L’Aula de Musica (Spain), the University of Massachusetts Amherst and Boston campuses, Five Towns College, and Longy School of Music, among many others
• Ethnomusicological presentations on Afro-diasporic rhythmic syntax at the Second International Symposium on the Music of Africa at Princeton University (2005) and the Third International Conference on Analytical Approaches to World Music at SOAS University of London (2014)
• Endorsements include Aquarian drumheads; Vic Firth drum sticks; Murat Diril cymbals; DEM’Sticks specialty rods, fans, and brooms; and Black Swamp Percussion and Dynamicx snares
• Panelist for the National Endowment for the Arts 2017 grant application review process