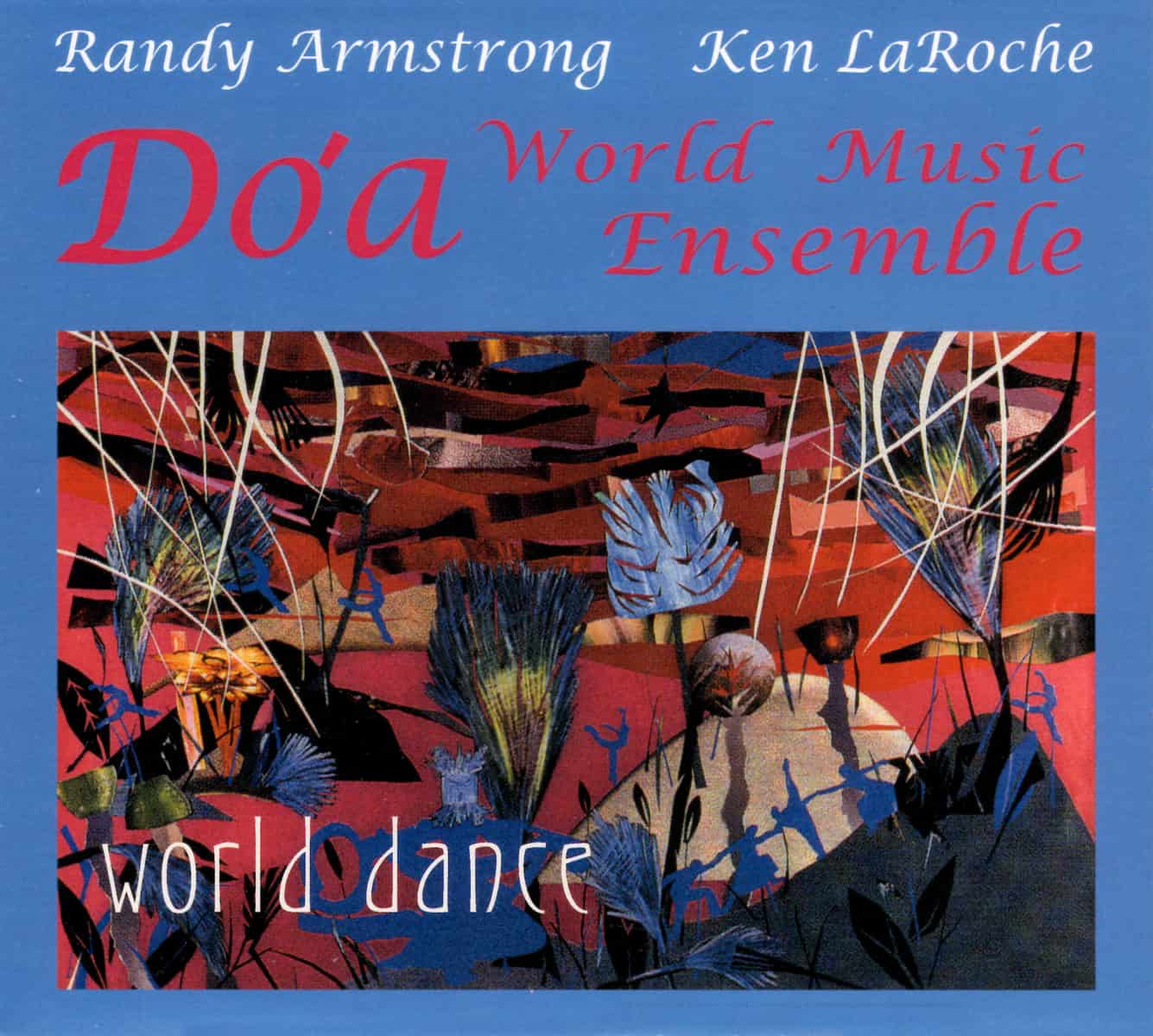 The World Beat Goes On…

“Before the Talking Heads recorded Remain in Light, before Peter Gabriel programmed his drum machines to play African polyrhythms, before Paul Simon and Graceland, and before the term “world music” was ever coined, there was Do’ah. The band was founded in 1974 by two New Hampshire musicians of eclectic musical skills and taste, Randy Armstrong and Ken LaRoche. Do’ah was one of the very first groups to combine musical instruments and traditions from all over the world to form a new unified whole

With this year’s release of World Dance on the CBS/Global Pacific label, Do’ah’s 5th album, the band still includes Armstrong and LaRoche who are joined for the second album by additional musicians Marty Quinn, Volker Nahrmann, and Charlie Jennison. Together these five musicians trade off on over 70 instruments from around the world.

A major focus of Do’ah’s music is the peaceful coexistence of the widely diverse peoples and traditions of the planet. Do’ah has earned formal recognition by the United Nations for their highly successful “Peace Tour ” of the United States and Canada. Highlights of the tour included the San Francisco International Peace Conference, where Do’ah played to an appreciative audience of over 8000 people. They were also recently part of the first Earth Run and an invitational tour of India.

Do’ah’s music can be described in a phrase, “life affirming.” The band’s name comes from the Arabic term Do’a, which means literally “to call to worship.” The music itself, while often described as New Age because of its message, is more akin to the world jazz of Don Cherry, Oregon, or Weather Report.

Do’ah’s beginnings in the mid-70’s as a duo featured Armstrong and LaRoche on guitar and flute. The early recordings spell their name in the traditional Arabic, Do’a, but was changed to avoid confusion with the punk-rock band DOA (Dead On Arrival!). ” That actually happened once,” says Armstrong, “we were both playing in the same city and some people showed up expecting DOA, who were playing across town.” Certainly, these two bands occupy the opposite ends of the musical spectrum.

Do’ah’s music is as many-faceted as the many instruments they play. “Do’ah falls into a lot of categories. So, what we’ve been able to do is cross over into many different markets…” explains Armstrong. “We’ve played in jazz festivals, we’ve been on fine arts series, we work at universities, and as a duo we’ve gone out on the folk circuit.”

Indeed, this writer’s first contact with Do’ah was a duo back in 1982 playing on a stage literally filled with exotic instruments at the now legendary folk club The Folkway, in Peterborough, New Hampshire.

Nowadays touring as a quartet, Do’ah; LaRoche, Armstrong, Quinn, and Narhmann, with the occasional addition of Jennison, travel with up to 75 instruments from the band’s personal collection of over 400. Ken LaRoche can be found playing concert and alto flute, piano, synthesizer, soprano sax, North Indian bansri flutes, South African kalimba, mbira, and various percussion. Randy Armstrong performs on acoustic and classical guitars, West African balafon, talking drums, mandolin-harp, Japanese biwa, Chinese yueh-chin, sitar, Bolivian charango, and percussion. Marty plays on various exotic percussion and drums, with Volker Narhmann, a native of Germany, on acoustic and electric bass, cellos, and keyboards. These two can provide a tight, and at times even funky, rhythm section.

To sample Do’ah’s music, pick any one of their five albums and your ears will be treated to a multi-cultural celebration of textures, rhythms, and voicings. Nowhere is this more evident than on their new album, World Dance, perhaps their most mature work yet. The album opens with “Wayo” which is actually getting a great deal of airplay and was used as background music on TV’s “Entertainment Tonight.” The song has a great flair for the dramatic hook, which you may find yourself humming afterwards. “Night Season” combines such widely removed instruments as the ceramic ocarina, acoustic guitar and synthesizer. The same goes for the poetically titled “Moth-Like Lovers of the Light.” The difference with Do’ah is that its use of synthesizer is as Armstrong puts it, “purely atmospheric.” When you hear an African balafon on a track, you can be sure it’s the real thing and not a sampled keyboard.

The centerpiece of the album where all the musicians really stretch out and show their mastery and skill is the album-sided composition “One World Symphony.” A suite containing three movements, “World Dance,” “19 Letters (19 beat Cycle),” and “The Awakening,” featuring the word “Peace” sung in 39 languages and arranged by Marty Quinn.

Do’ah has one other thing going for it that similar bands found in the new age category don’t – their music is extremely danceable. With what looks like a hit from the newest album, Do’ah is already in the studio working on the next. An extensive tour of the nation’s colleges and universities is planned in 1990-91, and plans are underfoot for a possible European festival tour.

If you enjoy world music and have been looking for a group who plays powerful, optimistic, and danceable tunes, an investigation into Do’ah is definitely in order.”